Every day approximately 100 metric tons of cosmic dust collides with Earth, mainly in the form of micrometeorites. Most of these mineral particles (iron, nickel, etc.) are smaller than grains of sand, and they are falling down on us all the time and all over the globe. Still, little is known about these exotic extraterrestrials. For instance, it was historically thought that micrometeorites (MMs) could only be found in pristine environments like Antarctica and ocean floors. Thanks to author Jon Larsen and the research in his book In Search of Stardust, however, scientists are discovering the presence of micrometeorites in populated, everyday locations, and readers across the globe can join in the search for MMs with relatively inexpensive equipment.

Micrometeorites belong to the oldest matter there is: mineral remnants from before the planets were formed. They may even contain stardust older than the sun, particles which have traveled farther than anything else on Earth. We are just beginning to explore these alien stones, yet they are everywhere around us.

Join us for an inside look at some of John Larsen’s discoveries of micrometeorites, depicted here in high-resolution color microscopic photography and in scanning electron microscope imagery.

For many years meteorite hunters have built micrometeorite traps of various types. Some have succeeded, like the water traps to catch unmelted micrometeorites, but given the low influx rate a really efficient trap would have to be much larger. In order to catch thousands of cosmic spherules the trap would have to be the size of a football field (or larger), and accumulate particles over decades. The challenges connected with the construction of something like that have discouraged more than one good scientist. There are however such areas already in place, possibly in your neighborhood, and ripe for harvesting: roofs.

Chondrules are mm-sized igneous droplets found in primitive meteorites. They formed in flash heating events in the Solar Nebula about 4.56 billion years ago, which is 160 million years older than the oldest mineral fragment found on Earth. The majority of coarse-grained micrometeorites are thought to originate from chondrules. 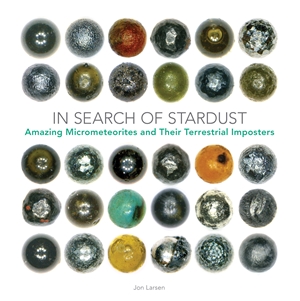 Tiny pieces of space rock called micrometeorites are everywhere on Earth. In Search of Stardust shows you how to find them!

The solar system is a dusty place. Every day approximately 100 metric tons of cosmic dust collides with Earth, mainly in the form of micrometeorites. Most of these mineral particles (iron, nickel, etc.) are smaller than grains of sand, and they are falling down on us all the time and all over the globe. Still, little is known about these exotic extraterrestrials.

In Search of Stardust is the first comprehensive popular science book about micrometeorites. It’s also a photo documentary comprising more than 1,500 previously unpublished images: the first atlas of micrometeorites, hundreds of which are depicted here in high-resolution color microscopic photography and in scanning electron microscope imagery.

Author Jon Larsen shows readers how and where to look for micrometeorites, explains the history of micrometeoritics, and offers chapters about micrometeorite formation, classification, and analysis. Thanks to Larsen’s work, for the first time it is now possible for anyone to find these amazing tiny stones from space.

For more than a century it was believed these incredible space objects could be found only in pristine, unsullied environs like Antarctica and ocean floors. Larsen became the first to break the code and find MMs in populated areas — in fact, they can be found in the nearest rain gutter. In the book Larsen explains how anyone with a bit of inexpensive equipment can find their own micrometeorites.

It was recently discovered that King Tut’s dagger was forged from a chunk of a meteorite. What else is made of extraterrestrial rock? Join the hunt!

A guitarist, composer, record producer, and painter, Jon Larsen began researching micrometeorites in 2009. His breakthrough came in February 2015 with the verification of the world’s first micrometeorite discovered in a populated area. In January 2016, Dr. Matthew Genge at the Natural History Museum in London evaluated and verified Jon Larsen’s collection of “urban micrometeorites.” Larsen resides in As, Norway.

If you have any comments on this article please contact us or get in touch via social media.
Kids Project! Succulent African Safari Garden
What’s Your She Shed Style?
See Explores Books