When it comes to skeletons, dinosaurs are history’s champs. Andrew Kirk takes a look at some of the skeletons these creatures left behind—and what they’ve taught us—in his book, Skeletons: The Extraordinary Form & Function of Bones.

The Triceratops is one of the most recognizable dinosaurs, with its three horns and huge frilled collar. It lived during the latter period of the dinosaur era, about 68 million years ago, and numerous fossil remains have been discovered, including complete skeletons, so that we have a pretty accurate idea of its structure. The first skeletal remains were discovered in the late 1880s in Denver, Colorado.

An adult Triceratops was about 25 feet long and 9 feet tall, and weighed roughly 10 tons. The skull constituted about one-third of the total skeleton, and its robustness means that it is the most frequently found fossil. The extravagant collar is now thought to have been used for display, and damage to some fossil skulls is consistent with the idea that males might have fought each other to assert dominance.

The leg bones of the Triceratops are short and robust. Though by no means the biggest dinosaur, Triceratops was still about twice as heavy as the largest land animal living today. This raises the question of why there are no longer any land animals as big as dinosaurs.

Biophysics tells us that it would be impossible for anything as big as a dinosaur to exist today, given the physical demands of body mass on the supporting skeleton, let alone the effort required to pump blood around such a huge volume. It has been suggested that there must have been some difference in the dinosaurs’ physical environment, either that there was less gravity because the Earth was spinning faster or, perhaps more plausibly, that the atmosphere was thicker and therefore more buoyant. Effectively, the dinosaur would be supported by the air around it in much the same way as the whale is supported by the water, reducing the effect of gravity. But nobody knows for sure. 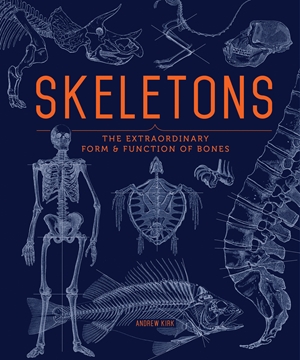 Everything you need to know about the framework of the body – our bones!

Bone is one of the most extraordinary materials in the natural world; flexible, strong, and available in a number of types and densities. Yet we can only absorb quite how amazing it is when we look at the range of different jobs it can do, from supporting a huge and heavy mammal like an elephant, to enabling a bat to fly. It can even teach us about the past! Scientists have gathered all the information they know about the dinosaurs and their dependents from their fossilized bones, extraordinary reminders of the way our world used to be.

Skeletons covers everything you need to know about bones. Beautifully illustrated with the engravings of the nineteenth and early twentieth centuries, learn all about the skeleton and the variety of actions it preforms to enable an animal to survive. Then, go deeper and see how skeletons have evolved over time. They can even adapt to different climates to help animals survive! You’ll also find complete directory of skeletons with its own box of key facts and statistics. It’s scientific eye candy!

Andrew Kirk was educated at Oxford University and worked in publishing for over twent years before becoming a writer. His previous titles have included books on ancient history and a study of Thoreau. This is his sixth book.

If you have any comments on this article please contact us or get in touch via social media.
The Real Story on the Colorful Cars of Cuba
5 Essential Tools for On-the-Go Art
See Explores Books