During World War II, heroism appeared in all manner of people, in both tremendous and quiet ways. For Britain, the Royal Air Force played a major role in ensuring the country’s safety, and The Secret Life of Fighter Command reveals the lives and work of the men and women who worked tirelessly in air bases to support the RAF and thwart Nazi attacks.

It wasn’t just the paid Fighter Command who supported the RAF, however. The Fighter Command relied heavily on the Observation Corps: the often unsung volunteer heroes of the war who kept vigilant eyes on the sky to warn of invasion.

The first eyes and ears to see the incoming waves of enemy fighters were members of the Observer Corps. They were often First World War veterans, and were keen to receive proper recognition. Photo: © War Office Official Photographer/IWM via Getty Images / The Secret Life of Fighter Command

In the wider story of Fighter Command, the Observer Corps never seems to get much recognition. Formed during the First World War, it was originally comprised largely of police constables in London. They were under instruction to keep watch for Zeppelins, and when they spotted any, to phone through the positions of the craft. The idea was so effective that it was then put into operation around the country, and particularly in coastal areas. At first, it was purely a police matter. By 1917, for the sake of tidiness, the Royal Flying Corps took over responsibility, under Major General Ashmore, though policemen were still used; the observation posts dotted around the coast were now linked more closely with anti-aircraft gun emplacements and searchlight stations. Naturally, after the war, the Corps dwindled away to practically nothing; but the idea of it remained firmly with the new RAF hierarchy. And so, by the mid-1920s, as part of a review of the defence of the realm, a fresh Observer Corps was formed.

It was made up this time of specially enlisted special constables; in other words, eager civilian volunteers. They had to be trained not merely to detect incoming craft, but also to distinguish between friendly and enemy planes. Out in the vast flat silence of the Kent marshes, new recruits were tested; the trials were a success, and Observer Corps stations were established in Kent and Surrey. The motto of the organisation: ‘Forewarned is forearmed’.

Soon there were observation stations across the south coast, and in the Home Counties too – though not nearly enough to have been of real use if some military catastrophe had overtaken the nation in those years. By the mid-1930s, the RAF understood the need for expansion of the Corps – and by 1936, it moved with Dowding into Bentley Priory.

Within the Corps, there was a fresh emphasis on providing cover not just for London and the Home Counties, but also for the great industrial cities of the Midlands and the north; German bombers would clearly be determined to try and paralyse the country’s wartime production lines. There were also moves to integrate the Corps more closely with the Dowding system.

The observation posts themselves were structures of the purest simplicity. Whether out on moorland or placed on top of London office blocks, they were basic wooden huts, sometimes a little elevated from the ground. There was not a chance that they would also function as shelters from bombing raids; they could barely shelter the volunteers from the weather. Nonetheless, they would be manned by the recruits, who had been issued with binoculars and would bring their tea flasks. Lacking portability, straightforward telephones were clearly impractical for such outdoor work, so the observers had to use specially designed ‘magneto’ phones in order to ring through to HQ. These were cranked by handle in order to generate sufficient voltage to ring bells on the same line and alert the operators. These telephones could be worn on the chest, by means of a harness, and came with headphones.

Posts were also equipped with a wondrously complex-looking device – part astrolabe, part giant compass set – known officially as a ‘Post Plotting Instrument’ but popularly as a ‘Micklethwait’ after the man who designed it. This involved a sighting bar, a fixed pointer and a fixed map, and enabled the user to roughly work out the height of a sighted aeroplane and then, by means of its horizontal bearing and vertical angle, to get an idea of the aeroplane’s position. Such data, when phoned through on the magneto, would be collated and added to data coming in from the radio direction finding; and so it was that with different sources and angles, finer, faster, more accurate calculations concerning the enemy’s position could be made.

The Observer Corps stood out; keeping watch in ramshackle structures through the night put them as firmly on the new front line as any soldier. Yet even after the declaration of war, the Observers were still essentially citizen volunteers.

They were paid; but they had to do a great deal of hard work in return for it. Class A observers agreed, in writing, to undertake forty-eight hours of observation work a week, for the hourly sum of 1s 3d (paying out a maximum of £3 a week). Class A observers were – at least at the beginning of the war – expected to be over the age of thirty-five. ‘They must have good hearing and eyesight (glasses are no bar to members of the centre crew),’ reported The Times. Class B observers were volunteers who agreed to twenty-four hours’ observation a week. Head observers – the men who worked at centres such as that in Maidstone – received a bonus £1.

The job was exacting; and those carrying it out were justifiably proud of their ability to swiftly distinguish between different sorts of planes at any hour of night, let alone day. Like many volunteers, though, they sometimes found their pride being a little squashed by the authorities, who perhaps made the mistake of seeing them simply as enthusiastic civilians. Indeed, the exact status of these vital men was much later to become a source of friction, especially for those who had, some years previously, served in the Air Force. Air Chief Marshal Sholto Douglas wrote to the Chief of the Air Staff, Sir Archibald Sinclair, in November 1940, as London was nightly battered and the Corps kept faithful watch on the incoming raids:

I wonder if the Air Council realise what a blow it is to the higher ranks of the Observer Corps to be told that they are not allowed to wear their Wings on Observer Corps uniform? There is definitely an atmosphere of gloom, if not mutiny on the question. The Observer Corps uniform, for good or ill, bears a close resemblance to that of the RAF. The senior officers of the Observer Corps are, almost without exception, retired Air Force Officers with a distinguished flying record. Most of these learned to fly prior to 1941, and in fact are pioneers of the flying Services … It seems perhaps absurd that so small a question should have such an effect … but I can assure you that it does. It … goes deeper than logic.

Sir Archibald went a little further in his response. As well as the token gift of ‘100 pairs of binoculars’ to the Corps, he also announced, the following year, that the entire body had received a terrific honour: it was henceforth to be known as the ‘Royal Observer Corps’. ‘For some time,’ ran one newspaper report, ‘there has been a certain amount of dissatisfaction at what the members of the Corps regarded as official recognition. The new title will no doubt give much satisfaction to watchers, plotters and tellers alike.’

A number of young women volunteered for the Observer Corps, working in hazardously exposed conditions and mastering the calculations of speed and trajectory produced on the ‘Micklethwaite’, an astrolabestyle device. Photo: © Planet News Archive/SSPL/Getty Images

In 1942, there was to be a further innovation: women volunteers were allowed to join men in their little lookout posts. Vera Charlton was in the northeast of the country, near Durham, and she joined up as soon as she could. She recalled: ‘The look-out post was built of cement. It was a small square building about eight or nine feet high with wooden floors and corners, and wooden things to stand on to look out. There was also a dugout with a wooden stove to heat things on, a shelter with a tiny little window and a Browning rifle. You had to learn how to fire that and how to fix bayonets – my father taught me how to as he was good at it.

‘We also had training lessons in the Odeon cinema in Newcastle on a Sunday when there were no shows on. The RAF would provide training films where an aircraft would appear on the screen for just a few seconds, and we would have to describe what it was. It was a sort of test, really, and there were also written tests on RAF procedures. In time I got my first class certificate but there was also an even higher grading, which was called the master test. For the master test, fifty aircraft would appear on the screen, one after another, and we had to correctly identify 95% of those aircraft … It wasn’t easy, but if you did pass you were given a little, pale-blue Spitfire badge to sew onto the sleeve of your battle dress.’ 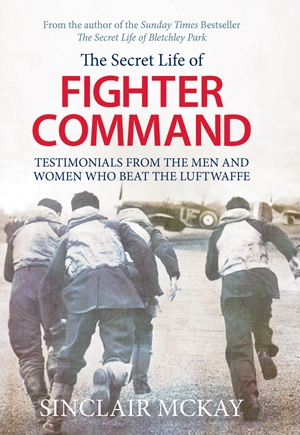 Praise for The Secret Life of Fighter Command

‘McKay stitches together a rich tapestry of material – some new, some familiar, including reports from the archive of The Times – to bring alive the all-engulfing drama of 1940, as Hitler’s Luftwaffe attempted to establish air superiority over England as a prelude to invasion. Poetry and sharp politics.’ –The Times

SINCLAIR MCKAY is the bestselling author of The Secret Life of Bletchley Park and The Secret Listeners for Aurum, as well as histories of Hammer films, the James Bond films, and the pastime of rambling. He lives in London.

If you have any comments on this article please contact us or get in touch via social media.
Home Cooking for Your Dog: A Low-Fat Starter Recipe
Homemade Beet Chips
See Drives Books