If you’re old enough, you might recall the days when the coolest guys in town cruised the streets in a shiny new 1978 Camaro. That was the year this classic pony car sported a new, flowing look and set a new record for annual sales. From The Complete Book of Chevrolet Camaro is a detailed look at what made the 1978 Camaro a big success at that time, and a cherished muscle car today.

The convertible had disappeared from the Camaro lineup in 1970, but buyers wanting fresh air and blue sky could soon order the optional T-top roof treatment. Listed as RPO CC1, this was a $625 option, and 9,875 buyers checked the box on the order form.

By the time the books closed on the 1977 Camaro, it had set a new record; for the first time in the Camaro’s history, it outsold the Ford Mustang. And now that it had topped the Mustang, Chevrolet wanted to keep the momentum up. It did it by releasing a restyled Camaro. In any vehicle’s life, a manufacturer will give a model a midcycle freshening, keeping the public’s interest alive while developing the next generation. Often, this freshening consists of revised front and rear sheet metal, new interior materials, and a brace of new colors and options. This was the path the Camaro followed for the 1978 model year.

Slippery front and rear body color urethane bumper covers gave the Camaro a much more integrated look, unlike years prior when the bumpers resembled chrome-plated railroad ties bolted to the vehicle. Now the design looked far more flowing. And while most of the powertrains were carried over from 1977, the overall package was more attractive. There were five different Camaros available, ranging from the economical Sport Coupe equipped with a base 250-cubicinch L-6, to the beefy Z28, recipient of a 350-cubic-inch V-8. Between them were a Type LT Sport Coupe, Rally Sport Coupe, and the Type LT Rally Sport Coupe. Confusing? You bet. But buyers flocked to showrooms. When the books were closed on the 1978 model year, a new record had been set, with 272,631 Camaros having been sold. Let’s see what all the fuss was about.

The Type LT was the top-selling Camaro model in 1978, with 71,331 built. Available with either a six- or an eight-cylinder engine, it stressed comfort and luxury in a sporty-looking package. The base price for a six-pot Type LT was $4,814, but with an option list as long as your arm, it didn’t take long to fatten the bottom line.

Under the hood, little had changed. The top dog Z28 was rated at 185 horsepower, 175 in California. This cast-iron powerplant used a hydraulic camshaft, 8.2:1 compression, two-bolt main bearings, and a Rochester four-barrel carburetor. The exhaust system didn’t use a muffler, instead depending on a single catalytic converter and a pair of resonators to give the dual exhaust tips a throaty growl. The Golden State was also deprived of a manual transmission.

Yet driving the Z28 returned a quality experience. Chevrolet had made subtle upgrades to the suspension, adding lower control arm reinforcements and beefing up the rear spring shackles. Aluminum wheels, a $265 option, were available for the first time on the Z28, and they reduced unsprung weight, which in turn improved ride quality and handling. While raw performance was not to be found beneath the hood, the Z28 made a strong visual statement. With its blacked-out grille, non-functional hood scoop, and front fender vents, the Z28 looked like a race car that stumbled onto the street. Evidently, a lot of customers wanted to be mistaken for race car drivers, as 54,907 were sold. With a new “string”-wrapped steering wheel, lush interior materials, and Z28 graphics scattered throughout the cockpit, the toprange Camaro was a comfortable place to be.

Throughout the Camaro line, the emphasis was on creature comforts with a dose of performance. Chevrolet engineers were burning the midnight oil trying to regain grunt lost to federally mandated emission regulations, as well as the weight gain due to required safety equipment. For 1978, the Camaro Z28 tipped the scales at 3,560 pounds, yet Engineering fitted the all Camaros except the Z28 with numerically lower rear axle ratios in an attempt to improve fuel economy. For Z28s equipped with a Turbo Hydra- Matic 350 automatic transmission, a set of 3.42:1 gears were used; Borg-Warner T-10 manual four-speed cars used a 3.73:1 ratio. The result by Car and Driver magazine on the drag strip was good for the day, with a 16.0-second run at 91.1-miles per hour trap speed. Top speed was 123 miles per hour, and bringing the Z28 to a stop from 70 miles per hour took 181 feet. For the day, this was impressive performance. In fact, the 1978 Camaro was the top-selling American car in West Germany, a country that knows a thing or two about performance.

The rest of the Camaro line basked in the glamour of the Z28, and while they weren’t the serious road warriors that the Z28 was, they could be optioned to provide an interesting drive. The Rally Sport was a separate Camaro model, not an RPO, and while it came with the base 110-horsepower (90 in California) 250-cubic-inch straight-six cylinder engine, it only took $185 to upgrade to the 145-horsepower (135 in California) two-barrel, 305-cubic-inch V-8. Buyers wanting a bit more beans could spend $300 and take home RPO LM-1, the non-Z28, four-barrel, 350-cubic-inch V-8 that was rated at 170 horses (160 in California). Both optional V-8s were popular, as 143,110 of the 305-cubic-inch engine were sold, while 92,539 buyers sprang for the 350 engine. It was clear that the public was hungry for performance. For the second year, the Camaro handily outsold arch-rival Mustang; 247,437 units sold to the little Ford’s 179,039. It wasn’t even close.

Partway through the model year, a new option appeared, RPO CC1, removable glass roof panels. This $625 option was created to mollify the part of the public that was clamoring for a convertible. This option was a reasonable alternative to a proper convertible, giving occupants a fresh-air experience while maintaining vehicle security. This pricey option was popular, with 9,875 sets sold. The Camaro was riding high, and the two-millionth Camaro was built at the Van Nuys, California, plant on May 11, 1978.

In great detail The Complete Book of Chevrolet Camaro profiles every year of Camaro development, from 1967 to the latest Generation in 2017. This book also features all the production vehicles, prototypes, show cars, anniversary editions, pace cars, and more from the vibrant Camaro culture.

The Complete Book of Chevrolet Camaro, 2nd Edition profiles every model of Camaro from 1967 to the start of the fifth generation. See it all here.

The Complete Book of Chevrolet Camaro 2nd Edition, continues the story of America’s premier performance car. In 2016, the sixth-generation Camaro rolled off production lines and roared onto America’s highways, earning best-in-class accolades from all over the performance spectrum. Renowned automotive photographer and historian David Newhardt is here to tell the Camaro’s story.

This is a Camaro book like no other. The Complete Book of Chevrolet Camaro, 2nd Edition covers the entire production history of Chevrolet’s iconic muscle car, from the original concept car (codenamed Panther) to the latest and greatest sixth-generation vehicle. The Complete Book of Chevrolet Camaro showcases every model of Camaro since 1967 in stunning detail, using original and GM archival photography as well as insider interviews and technical specifications.

The original model was developed to fight the Mustang in the muscle car wars of the late 1960s; the second-gen cars became icons of American automotive styling in the 1970s; the third-gen cars helped lead a muscle car renaissance in the 1980s; the refined fourth-gen cars continued to demonstrate GM’s prowess and engineering know-how through 2002; the fifth-gen Camaro brought back the iconic nameplate in 2010; and now the latest generation has debuted to rave reviews in 2016. This book also features all the production vehicles, prototypes, show cars, anniversary editions, pace cars, and more from the vibrant Camaro culture.

If you have any comments on this article please contact us or get in touch via social media.
Broccoli Bread
Manifest Wishes and Hopes with this Dream Board
See Drives Books 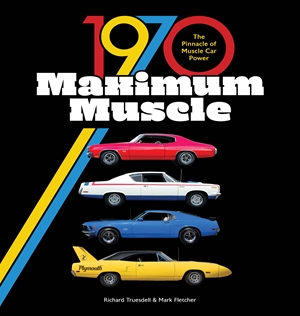